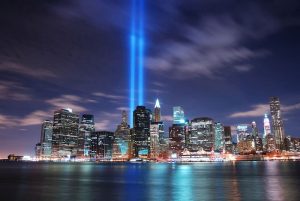 September 11th, 2001, the day of the terrorist attack on New York, upon Virginia, upon Pennsylvania, and indeed upon the entire free world, is a date that will live in people’s memory forever.

The world watched in horror as the twin towers of The World Trade Center in New York City, long a symbol of the nation’s finance and commerce activities, collapsed. The Pentagon suffered a partial collapse of the building’s west side when a third airplane crashed into it. A fourth plane headed to Washington DC crashed into a field near Shanksville PA after passengers thwarted the hijackers. The attack caused billions of dollars in damage to property and infrastructure. The effect upon many sectors of the American economy was, in the immediate aftermath, devastating.

Even greater was the cost in human lives. Nearly 3,000 people were lost that day — those who were in the twin towers, in the Pentagon building, in the airplanes so cruelly used as missiles, and the brave men and women of police and fire departments who sacrificed their lives to save others.

But fear and defeatism have never been American values, and despite the tragedy perpetrated upon them, Americans rallied and recovered. The US remains a strong and vibrant social and economic world power.

On the 18th anniversary of the events of 9/11, we join our friends and neighbours to the south in remembering and paying tribute to lost loved ones and to the ones who continue the tradition of freedom, hope, and prosperity that is America.

Our thoughts and prayers are with you, always.

Get Your FREE Information Pack

Simply fill out the form and you will receive an email shortly with the Free Info Pack.
Click Here